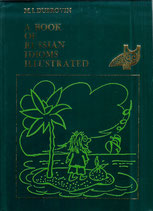 The Russian language is highly idiomatic. The idioms, part and parcel of the language, add immensely to its richness.

The Russian language is highly idiomatic. The idioms, part and parcel of the language, add immensely to its richness. Their variety is accounted for by the historical development of the Russian language. Often Russian idioms are a stumbling block for non-Russian speakers, as they fail to understand Russian, both written and spoken, without the mastery of a sufficient number of idioms, especially those which occur most frequently.

The idioms are arranged alphabetically as units. If the main verb can be used both in the imperfective and perfective aspects, the idiom is given in the aspect that occurs more fre-quently in speech. Idioms in which the order of components is not fixed strictly are given in their most typical form.

Each entry consists of a Russian idiom, its transliteration, literal translation and explanation. Also included wherever they were available, are English equivalents. (Given in many instances are two or three English idioms covering the meaning of the Russian idiom).

The literal translation method wants two explanations. First, it was sometimes impossible to stick strictly to a word for word translation without making it sound like nonsense. When this is the case additional words were added to the English trans-lations to make them sound comprehensible (see, for example, водой не разольёшь). Also with that end in view the words something or someone were often added to the English translation.

Second, we are fully aware that any idiom literally trans-lated into another language immediately loses its idiomatic force and very often presents a most awkward appearance. Moreover, it is evident that the more an idiom gets rid of a direct reference to the literal meaning of its components the more it assumes the nature of a real idiom.

Still we believe that if the student knows what the compo-nents of the idiom mean, he will often find it easier to under-stand the meaning of the idiom.

Several Russian idioms included in the book have more than one meaning. In this case given is the meaning that is more frequent in conversation.

Each entry, as a rule, is supplied with two pictures, one wherever possible to illustrate the literal meaning of the idiom, and the other to illustrate its real meaning. We hope that while the first picture can help convey the literal meaning of the idiom, or in other words, present its components, the second picture will show how the idiom behaves, i. e. in what cir-cumstances it could be used. It should be borne in mind, however, that sometimes a number of synonymous meanings are given to explain the idiom, whereas the situational illustration refers to only one, which is the commonest.

The use of humorous drawings in this book is, in our view, justified by the fact that there is much humour in Russian idioms. Besides, the situational drawings give the idioms the emotional colouring that is characteristic of their usage in speech.

Russian idioms are largely of popular origin; hence their subject-matter is human life, or, better to say, human relations. In this respect we would like to point out that the word душа (soul), which is a component of many Russian idioms, does not have any mystic sense. This can be seen from the fact that in most cases the word душа can be and very often is replaced by the word сердце (heart) without changing the meaning of the idiom (e. g. открывать душу / сердце, брать за сердце/ душу, etc.). That is why a symbolic drawing of the human heart was given to represent the word душа.

Finally, we would like to say that although this book is something like a dictionary, it is not intended for use only as such. To be sure, that is one of its functions, but its overall purpose goes beyond this. We hope that the reader will find it interesting enough to use it not only for looking up one or another idiom that needs explaining. He will also find it a good companion that will help him get a taste of the peculiar charm and vividness that idioms lend Russian speech. Only if used in this way will the book have justified the work that has been put into it.

As far as we know this kind of book is the first attempt to present Russian idioms for foreign students in such a peculiar manner; therefore, any criticism concerning the whole book or any aspect of it will be welcome.