The Fallen by Jefferson Parker

A detective with a unique gift, a tragic suicide and big city corruption - The Fallen’ is the stunning new thriller from the author of The Blue Hour’: a great writer  he’s amazing’ Lee Child
What if you could tell someone was a killer just by looking at them?
Detective Robbie Brownlaw can. A six-storey plunge from a burning hotel leaves him with the usual broken bones and something different. Synesthesia. The ability to see words and emotions as colours makes Robbie a human lie detector.
It's a condition that might have helped Garrett Asplundth. Hired to look into rumours surrounding a certain madam's Little Black Book, Garrett found a lot more than the usual round of losers and sad husbands. But the dirt came at a high price.
Now he's dead and it's only when Robbie gets hold of the book that he finds out just why Garrett was so curious and why others will kill to get it back
A good cop, Robbie Brownlaw was thrown from a sixth-floor window of a downtown hotel and miraculously survived. The traumatic incident left Robbie with a fast-track career in the San Diego P.D.'s Homicide division . . . and a rare neurological condition that enables him to see people's emotional words as colored shapesgreen trapezoids of envy, red squares of deception . . .
Another good man lies dead in a blood-splattered Ford Exploreran ex-cop-turned-ethics investigator whose private life was torn open by unthinkable tragedy. Whether Garrett Asplundh's death was suicide or murder isn't immediately apparentbut it's soon clear to Robbie and his smart, tough partner, McKenzie Cortez, that Garrett had hard evidence of sex, scandal, and corruption spreading deep into local government. But pursuing the truth could prove more emotionally devastating than Robbie ever imagined.
Praise for The Fallen’:
Writes with intelligence, style and sensitivity, and he belongs in the first rank of American crime novelists.’ Washington Post
Excellent with his trademark psychological acuity and empathy, Parker creates a world of fully realized characters coping with obsession and loss compelling.’ Publisher’s Weekly
Deft his dialogue crackles and pops in an intricate and well-paced tale set in a city where shadowy characters lurk beneath sunny skies.’ Booklist

Praise for Jefferson Parker:
A great writer he’s amazing.’ Lee Child
Parker gets better and better.' Literary Review
Insanely imaginative.' New York Times
Parker has only one rival - Thomas Harris.’ Washington Post
One of our top writers.’ Harlan Coben
I rank the crime novels of Jefferson Parker up there with the best.’ Sue Grafton
About the Author:

Jefferson Parker (known as T Jefferson Parker in the States) was born in LA in 1953. He worked as a newspaper journalist in California, covering the crime beat, where his novels all reflect the sunny wickedness of his home state.
He is the author of twelve novels; both Silent Joe’ and California Girl’ won the prestigious Edgar award (the equivalent of our CWA Gold Dagger). His latest novel, set in San Diego, features a detective with synaesthesia. The Fallen’ is published in hardback in May 2006.
Jefferson lives in Laguna Beach, California. When not working on his books, he spends his time with his family, hiking, hunting and fishing, and haunting the public tennis courts.

The Fallen by Jefferson Parker 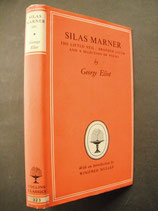 George Eliot's tale of a solitary miser gradually redeemed by the joy of fatherhood, Silas Marner is edited with an introduction by Winifred Mulley.

Wrongly accused of theft and exiled from a religious community many years before, the embittered weaver Silas Marner lives alone in Raveloe, living only for work and his precious hoard of money. But when his money is stolen and an orphaned child finds her way into his house, Silas is given the chance to transform his life. His fate, and that of Eppie, the little girl he adopts, is entwined with Godfrey Cass, son of the village Squire, who, like Silas, is trapped by his past. Silas Marner, George Eliot's favourite of her novels, combines humour, rich symbolism and pointed social criticism to create an unsentimental but affectionate portrait of rural life.

This text uses the Cabinet edition, revised by George Eliot in 1878. David Carroll's introduction is complemented by the original Penguin Classics edition introduction by Q.D. Leavis.

Mary Ann Evans (1819-80) began her literary career as a translator, and later editor, of the Westminster Review. In 1857, she published Scenes of Clerical Life, the first of eight novels she would publish under the name of 'George Eliot', including The Mill on the Floss, Middlemarch, and Daniel Deronda.

If you enjoyed Silas Marner, you might like Nathaniel Hawthorne's The Scarlet Letter, also available in Penguin Classics.

'I think Silas Marner holds a higher place than any of the author's works. It is more nearly a masterpiece; it has more of that simple, rounded, consummate aspect ... which marks a classical work'
Henry James

Mary Ann Evans, known by her pen name George Eliot, was an English novelist, poet, journalist, translator and one of the leading writers of the Victorian era. She was born in 1819 at a farmstead in Nuneaton, Warwickshire, England, where her father was estate manager. Mary Ann, the youngest child and a favorite of her father's, received a good education for a young woman of her day. Influenced by a favorite governess, she became a religious evangelical as an adolescent.

Her first published work was a religious poem. Through a family friend, she was exposed to Charles Hennell's "An Inquiry into the Origins of Christianity". Unable to believe, she conscientiously gave up religion and stopped attending church. Her father shunned her, sending the broken-hearted young dependent to live with a sister until she promised to reexamine her feelings. Her intellectual views did not, however, change. She translated "Das Leben Jesu", a monumental task, without signing her name to the 1846 work.

After her father's death in 1849, Mary Ann traveled, then accepted an unpaid position with The Westminster Review. Despite a heavy workload, she translated "The Essence of Christianity", the only book ever published under her real name. That year, the shy, respectable writer scandalized British society by sending notices to friends announcing she had entered a free "union" with George Henry Lewes, editor of The Leader, who was unable to divorce his first wife. They lived harmoniously together for the next 24 years, but suffered social ostracism and financial hardship. She became salaried and began writing essays and reviews for The Westminster Review.

Renaming herself "Marian" in private life and adopting the penname "George Eliot," she began her impressive fiction career, including: "Adam Bede" (1859), "The Mill on the Floss" (1860), "Silas Marner" (1861), "Romola" (1863), and "Middlemarch" (1871). Themes included her humanist vision and strong heroines. Her poem, "O May I Join the Choir Invisible" expressed her views about non supernatural immortality: "O may I join the choir invisible/ Of those immortal dead who live again/ In minds made better by their presence. . ." D. 1880.

Her 1872 work Middlemarch has been described by Martin Amis and Julian Barnes as the greatest novel in the English language.

George Eliot's tale of a solitary miser gradually redeemed by the joy of fatherhood, Silas Marner is edited with an introduction by Winifred Mulley.

Eleven Minutes is the story of Maria, a young girl from a Brazilian village, whose first innocent brushes with love leave her heartbroken.

Eleven Minutes is the story of Maria, a young girl from a Brazilian village, whose first innocent brushes with love leave her heartbroken.

Eleven Minutes is the story of Maria, a young girl from a Brazilian village, whose first innocent brushes with love leave her heartbroken. At a tender age, she becomes convinced that she will never find true love, instead believing that “love is a terrible thing that will make you suffer. . . .” A chance meeting in Rio takes her to Geneva, where she dreams of finding fame and fortune.

Maria’s despairing view of love is put to the test when she meets a handsome young painter. In this odyssey of self-discovery, Maria has to choose between pursuing a path of darkness—sexual pleasure for its own sake—or risking everything to find her own “inner light” and the possibility of sacred sex, sex in the context of love.

If you have any questions or need additional information, please feel free to contact Mezerah:

Paulo Coelho, born in Rio de Janeiro in 1947, is one of the bestselling and most influential authors in the world. The Alchemist, The Pilgrimage, The Valkyries, Brida, Veronika Decides to Die, Eleven Minutes, The Zahir, The Witch of Portobello, The Winner Stands Alone, Aleph, Manuscript Found in Accra, and Adultery, among others, have sold 150 million copies worldwide.

The Brazilian author PAULO COELHO was born in 1947 in the city of Rio de Janeiro. Before dedicating his life completely to literature, he worked as theatre director and actor, lyricist and journalist. In 1986, PAULO COELHO did the pilgrimage to Saint James of Compostella, an experience later to be documented in his book The Pilgrimage. In the following year, COELHO published The Alchemist. Slow initial sales convinced his first publisher to drop the novel, but it went on to become one of the best selling Brazilian books of all time. Other titles include Brida (1990), The Valkyries (1992), By the river Piedra I sat Down and Wept (1994), the collection of his best columns published in the Brazilian newspaper Folha de São Paulo entitle Maktub (1994), the compilation of texts Phrases (1995), The Fifth Mountain (1996), Manual of a Warrior of Light (1997), Veronika decides to die (1998), The Devil and Miss Prym (2000), the compilation of traditional tales in Stories for parents, children and grandchildren (2001), Eleven Minutes (2003), The Zahir (2005), The Witch of Portobello (2006) and Winner Stands Alone (to be released in 2009). During the months of March, April, May and June 2006, Paulo Coelho travelled to celebrate the 20th anniversary of his pilgrimage to Saint James of Compostella in 1986. He also held surprise book signings - announced one day in advance - in some cities along the way, to have a chance to meet his readers. In ninety days of pilgrimage the author traveled around the globe and took the famous Transiberrian train that took him to Vladivostok. During this experience Paulo Coelho launched his blog Walking the Path - The Pilgrimage in order to share with his readers his impressions. Since this first blog Paulo Coelho has expanded his presence in the internet with his daily blogs in WordPress, Myspace & Facebook. He is equally present in media sharing sites such as YouTube and Flickr, offering on a regular basis not only texts but also videos and pictures to his readers. From this intensive interest and use of the Internet sprang his bold new project: The Experimental Witch where he invites his readers to adapt to the screen his book The Witch of Portobello. Indeed Paulo Coelho is a firm believer of Internet as a new media and is the first Best-selling author to actively support online free distribution of his work.