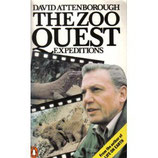 Three of David Attenborough's early adventures are collected in this book. David Attenborough's books have opened up the incredible world of natural history to millions of viewers and listeners. Zoo Quest for a Dragon takes us back to one of his earliest projects, when the BBC and London Zoo joined forces on several animal-collecting expeditions. Quest in Paradise follows his next animal collecting and filming trip to New Guinea, home of the exotic Birds of Paradise. Quest Under Capricorn details Attenborough’s expedition to Australia in 1963 in search of more rare species. There he meets Aborigines, goes walkabout in the bush, and learns the secret craft of the artists of Arnhem Land.
David Attenborough first established his current reputation on television with his Zoo Quest series, and these original accounts of his travels proved him to be an excellent writer and a gifted and amusing story teller. This edition brings together, slightly abridged, his descriptions of three journeys - to Guyana where he explored the broad savannahs of the Rupununi, the creeks and swamps of the coast, and the remote forest reserve of the Amerindians; to Indonesia in search of the Komodo dragon; and to Paraguay to seek, among other animals, the elusive giant armadillo.
The book abounds with superb vignettes of bizarre characters - Mistah King, the mermaid fisherman; the shanty singers Lord Lucifer and the Great Smasher; Comelli, the wandering jaguar hunter; and the fat, jolly Gertie who claimed she has a 'highly nervous psychological disposition'. The author also tells, disarmingly, of the hardships of the journey by launch and canoes up the rivers of South America, of his travel by horseback through the parched, inhospitable Chac of Paraguay, sometimes swamp and sometimes desert, and of a hazardous voyage by prau under the captaincy of a gun-smuggler.
At all times the author shows his acute powers of observation, his irrepressible sense of the ridiculous, and his gift as a brilliant raconteur. No one has written more entertaining travel books, and this collected edition, superbly illustrated by photographs, will be hugely enjoyed for its evocative descriptions of animals, people and places.

He is the younger brother of director and actor Richard Attenborough. 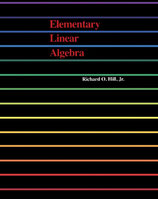 Elementary Linear Algebra reviews the elementary foundations of linear algebra in a student-oriented, highly readable way. The many examples and large number and variety of exercises in each section help the student learn and understand the material. The instructor is also given flexibility by allowing the presentation of a traditional introductory linear algebra course with varying emphasis on applications or numerical considerations. In addition, the instructor can tailor coverage of several topics.

Comprised of six chapters, this book first discusses Gaussian elimination and the algebra of matrices. Applications are interspersed throughout, and the problem of solving AX = B, where A is square and invertible, is tackled. The reader is then introduced to vector spaces and subspaces, linear independences, and dimension, along with rank, determinants, and the concept of inner product spaces. The final chapter deals with various topics that highlight the interaction between linear algebra and all the other branches of mathematics, including function theory, analysis, and the singular value decomposition and generalized inverses.

This monograph will be a useful resource for practitioners, instructors, and students taking elementary linear algebra.